So by now you all know I’m a little pig crazy. Baby pigs are in my mind the cutest farm animal around! In this post I’ll walk you through the birthing process of a pig. Every time is usually different though so we’ll just focus on our most recent litter, born March 27th.

Lets start at the beginning. We have 2 major show dates we aim for that people are looking to buy pigs. So in order to have pigs the right age to show at our local shows they must be born in a certain window of time. This can be tricky  making sure the heat cycle lines up to breed at the perfect date range. A normal heat cycle for a pig is 21 days, so if you don’t get them bred the first time, 21 days later you get another chance, but at that point you may be out of your window of time.

Below you can see our gilt Merida, she’s in “standing” heat in this picture. I sprayed boar scent in front of her and pressed on her back to see if she’ll stand. She’s standing still and doesn’t move for a few minutes. She’s ready to be bred!

We don’t live breed, we Artificially Inseminate (AI) our pigs. That means we don’t have a boar with our females to get babies, instead we order semen from boars we hand pick and AI them. This allows us to look at our female and her faults, find a boar that corrects her areas of weakness to have a better quality set of pigs. I could literally talk all day about this but I won’t “boar” you with the details (pun intended). I know I’m hilarious.

A pigs gestation period is 114 days, in the pig world it’s also known as, 3 months, 3 weeks, 3 days. They can vary like anything else, but our sow Paisley is usually right on the money! This last litter she didn’t disappoint.

We have our pigs in a farrowing crate when it’s time. Farrowing just means giving birth to baby pigs. The crate we use is designed to keep the babies safe, as well as the humans helping out. There is a lot of negative talk from HSUS and PETA when discussing farrowing crates used for pigs. However, I can promise you for our farm I wouldn’t do it any other way and I’ll tell you why.

Here is a picture of a crate, nicely cleaned and ready for a new tenant.

Its very common when a sow lays down to nurse her babies that she can smash and kill them. Some sows are better mom’s than others and are more careful, but even so it happens. When they are in the crate the death rate for babies goes way down because they can’t “flop” over and smash their infants.

Another reason we use them is for our safety. As good as Paisley is as normally, as a mom she’s extremely protective. Which I’m glad of, she’s doing her job. However, she’ll also bite your arm off if you get near her in the first 24-48 hours. I don’t know if you’ve ever heard a pig growl, but it sounds like a mad grizzly bear and you don’t want to be close! While in the crate, we can assist babies during birth and don’t have to worry about losing a limb. There are also times where sows will eat their own babies, known as going savage. The best way to keep everyone safe and happy is having them in a crate.

We try and keep watch, and 1-2 even 3 days before we expect birthing to start we load them in the crate. This allows them to relax and get use to their new home, especially for first timers. Before going in the crate they get a nice soapy bath to make sure they are good and clean before birthing. We want everything as sanitary as possible!

This is Paisley after a bath and getting a pregnancy photo shoot! 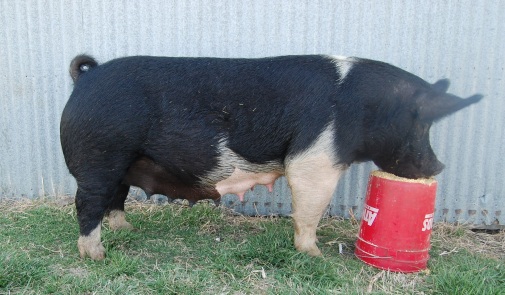 Pigs can be born head first or feet first, both ways are normal. I want them to be born without any assistance, but there are times some need to be pulled. This can be because a baby is stuck because it’s too big or just positioned wrong. It can also be because mom has given up and decides to stop pushing. We wait around 10-15 minutes and if we don’t have a pig born I go in to feel whats going on. Sometimes I pull out a dead pig, sometimes it’s alive and huge and just needs a little help. Either way we are prepared. This last litter, she had 10 completely unassisted in about an hour. She was spitting them out no problem. Then I noticed she had stopped but still no afterbirth, so I went in to check and the last baby, #11, was dead. Hate to see it, but it does happen. Overall she did a great job and has 10 healthy babies! 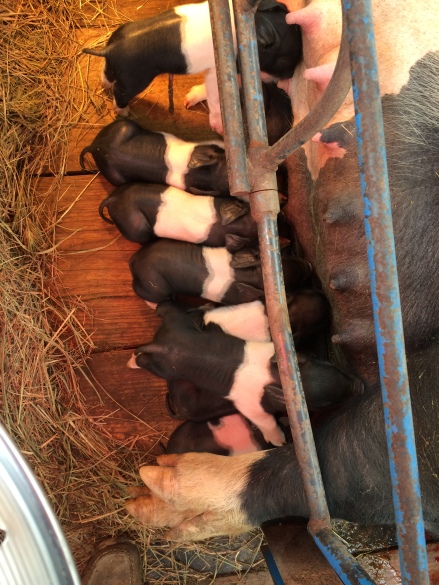 After each pig is born, we take a towel, wipe off the gunk and set them down. They are aggressive little things and know exactly where to go and what to do to get some milk! The babies can’t regulate their body temperature for the first 3 days, so they huddle under a heat lamp to stay warm.

When the babies are 2 days old they get a shot of iron, which prevents anemia. Their teeth and tails get clipped. This is so they don’t chew on each other tails, and their sharp needle teeth get clipped so they don’t tear up momma while nursing. They also get special notches in their ears for their identification. They all get the same notch in their right ear to identify they are from the same litter, and they each have a different notch in their left ear to serve as an individual number to identify them by.

My little helper never misses a chance to hang out with the pigs, no matter what is going on. She wears her special head phones to protect her ears from those loud squeals and she’s watching to make sure daddy does it right! 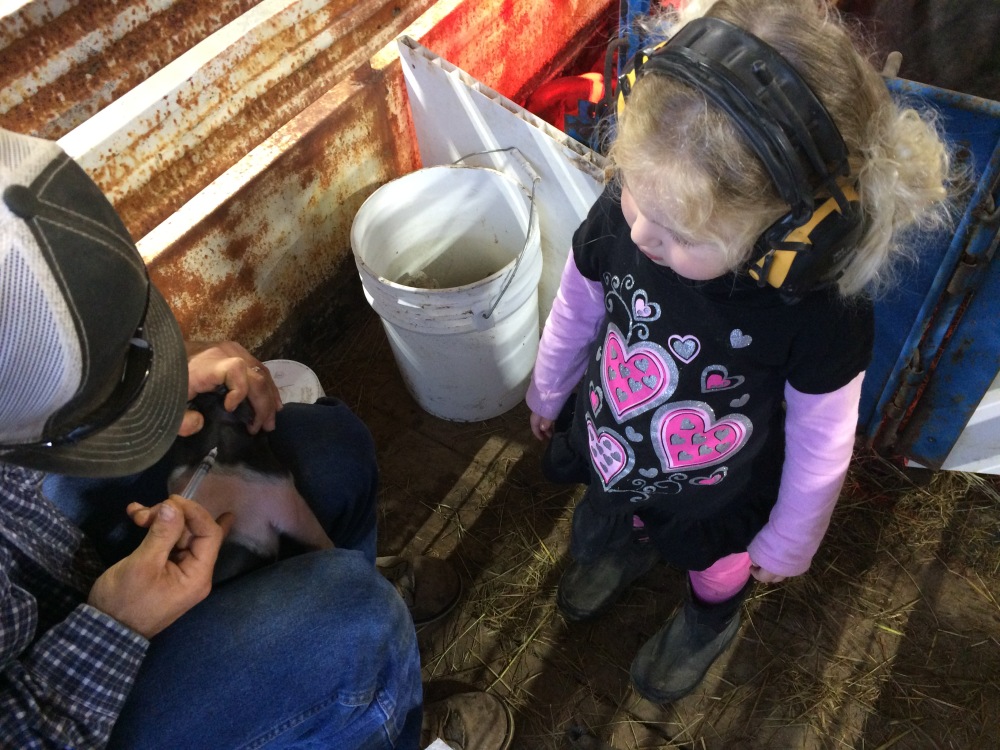 After 48 hours usually the sow has calmed down and isn’t as aggressive. I let her out to walk around and get some air away from her needy babies. It doesn’t take long though and shes ready to go back to the crate to be with her little squealers. I should also mention, before they even have their babies our pigs are pretty eager to go in the crate on their own. I mean they have food, water, and get pampered, for a pig what’s not to love?

Then usually after a week they are moved out of the crate to a pen and the growing really starts. The pen has plenty of room and a small panel is placed in the middle to allow the babies to get away from mom and start eating feed. If the feed was just out with babies and mom, it wouldn’t last long because the sow would devour it before the babies got a chance, even though she’s on full feed herself. Maybe that’s where the term pigging out comes from, they always want more!

Once they are 7-10 days old they have the feed figured out, but are still nursing like clockwork. At 21-28 days old they are weaned.  Now separated from mom and placed in pens of just 2-3. This ensures the bigger ones don’t get all the feed!

I hope you learned more about pigs today, and how pork is made from the very beginning! Thanks for hanging in there with me, sometimes I can ramble on and on when it comes to one of my favorite animals. Who doesn’t love little bacon bits?!